This came to me in email from inward/outward: A project of the Church of the Saviour:

At Fifty-Seven
I feel like I stumbled
down a hill of years, only
to land in a pile of my books.

Along the way, I cracked
like a Russian doll; finding
something smaller and more
essential inside every version
I've known as me.

And now, when all I know
bursts into flame each time
I try to give it away, I'm asked
what matters.

There's something perfect
in how we're worn; like sculptures
left for Spirit and wind to finish, the
film taken from our eye just as
our heart is exposed, one
crumbling into the other.

And that's all I know about it -- although "At Sixty-Five" would also fit, as a title, from where I sit!
Posted by Crimson Rambler at 10:47 AM 1 comment:

the Amnesty ad that the Financial times wouldn't publish. 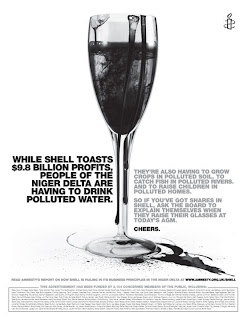 Please share this as widely as possible -- and a thank you to Good in Parts for the link!
Posted by Crimson Rambler at 9:38 PM 2 comments: 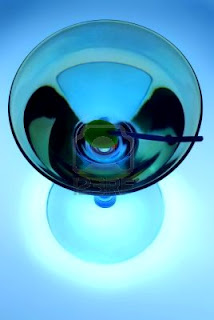 A lengthy Saturday. And the end of a lengthy week with more than its share of aggravations. But they came alongside great compensations, and we're all still here and kicking.

Prairie Metropolis had its early-May blizzard in Tuesday. Monday--rain, v. welcome in itself, but Monday night it turned chilly with strong NW winds and then a screaming snowstorm: heavy when I woke up, and got steadily more IGNORANT through the morning.

Fortunately Harriet-the-Echo was still wearing her snow tires...got out of my driveway all right after I cancelled the cross-town meeting scheduled for early morning, off to St. Curious to work on preparations for Big Deal Fundraising Banquet on Thursday.

But when I came home Tuesday late afternoon, there was a surplus of tire tracks in the deep driveway snow, and I thought, "Ah! he has taken his van and gone away, excellent."

Alas, too many tire tracks. He had taken van out, brought van back, and instead of returning it to its previous nice dry nesting place aligned with the driveway...he had driven it into the deep snow in the middle of the yard and gotten it most well and truly stuck...and in its stuck state, he was attempting to change one or more tires.

Over Wednesday and Thursday , to my increasing distress and dismay, he continued to try to extricate it. And of course, when you're stuck, the Preferred Method is just to tramp mindlessly on the gas, right? And go on flinging grass and mud from under your wheels until you've gotten right down into the root systems of the Nine Poplars (major feature of the backyard at Tether's End, aka "The Unpleasaunce"). And until you've run out of gas.

But in the meantime -- an unexpected visit to Prairie Metropolis by Brother #3...nice meals together and lots of good talk.

And in the meantime, increasingly happy preparations with Fab Rector for the fundraising banquet, much assisted by Amazin' Secketry who clustered and organized masses of Unbelievable Donated Tat into Exquisite Gift packages for the silent auction. Joyful grace note: disposal of six, count'em, six superfluous baskets out of the Rambler pantry as containers for Exquisite Gift packs.

And the dinner itself was delightful. Every aspect was exceptional, and early in the proceedings there was a kind of corporate "click," a "tipping moment," where you could just feel the whole group deciding "RIGHT! This is now officially a Good Time, let'er rip!!!" Great food, great company, great MC, super-great guest speaker.

And the pre-prandial martini didn't hurt either, yum. The Excellent Elderly Ladies of St. Curious rejoiced that their very favourite expert martinist was on duty at the bar that night. "There is something about a martini," as Ogden Nash wrote, "...and to tell you the truth, it's not the vermouth. I think that perhaps it's the gin."

So that it was not too troubling, coming home on Thursday night, to find large clots of loose mud in the driveway (snow had meantime pretty much melted)...and the van gone...and the fence stove in, the picnic table shattered, and one of the garbage cans flattened and its contents strewn far and wide.

Friday evening and this morning, was back at St. Curious working on the Compost Project. Much much joy -- a big group working, Excellent Elderly Ladies sitting in a row of lawn chairs unfolding and opening black plastic bags; all and sundry shovelling compost from the giant heap into the measuring bins and bagging the contents and wheelbarrowing the bags to and fro. There was coffee, there was baking, there were dogs, all the jokes were funny and the weather was fine...we even had customers!!!

Excellent Son Units and Wondrous Grandson came together this afternoon and did a good deal of raking and shovelling and power-washing flung mud off the fences and the back of the house. Grass-seed is #1 on Monday's list of to-do's.

And I've dug the first dig-up of my front flower bed, preparatory, eventually, to a massive sowing of poppy seeds.

And the Rambler's tulips are in glorious bloom...

And tomorrow is also a day.
Posted by Crimson Rambler at 9:06 PM 4 comments:

I'd feel worse i.e. guiltier if I weren't aware of a general slackening in blog-energy among many posting folks.

At the moment -- Monday again -- second load of laundry on the go, one more in the queue, big basket of clean things, some of them requiring ironing, to get through before bedtime.

I am awaiting a phone-back from a housing agency...I'm researching potential beneficiaries of next year's homelessness campaign by the Council of Churches here in Prairie Metropolis. As the committee meets in about 4 hours...well, my info will be FRESH at least.

I have taken all my pills for the day ("And behold, there was a rattling")...I have unloaded the dishwasher from last night and begun the re-load process.

I have given my sourdough starter a shot of sugar, may get something baked a little later...

I have put together a big bowlful of yogurt-ingredients and set them in a warm oven to get acquainted with each other; will check on them about dinner time to see if they've "yogued" as desired.

Meantime took the remainder of my store-boughten yogurt and made a Tupperware container of Wiggly Pink Dessert.

Emptied the carton of Oldest Eggs and hard-cooked them for further developments.

In preparation for the yogurt-making, went downstairs to the pantry and was ruthless with the top two foodshelves--in the process found canned milk and thereby avoided an unnecessary jaunt to the supermarket. Brought upstairs, also, cans of cut green and wax beans, kidney beans, chick peas, toward an eventual four-bean salad after the manner of Peg Bracken, UWBP.

Read the Daily Howl...gnashing teeth in an encouraged sort of way over picture-story of clerical colleague and his 45 lb. weight loss ("We hates him, my precious, we hates him").

Eliminated about 50 emails from the inbox, and twiddled about on Facebook to no great effect. Greeted a couple of REAL friends, electronically, on their birthdays.

Yesterday was full...preached and presided at St. Curious in the morning, both services, the Rector being on R & R in the Pointier Bits of the province; home by way of grocery store, made substantial lunch for self and #1 Son with open faced hamburger sandwiches and vegetable accompaniments.

Napped...awakened by loud and prolonged ringing of doorbell...Near Neighbour on the doorstep begging permission to sleep overnight in his family's (old, somewhat rusty) van, parked for convenience' sake in the backyard here at Tether's End. Near Neighbour's indulgences in recreational chemicals have broken off all relations with every member of his family including wife and grown daughters across the street. Befuddled with sleep and surprise, gave permission. Regretting it.

Away in the early evening in considerable perturbation of spirit, see above, for ordination of Promising Young Person whom I took on pre-ord retreat Wednesday-Friday...a pleasant, restful, candid, conversational time. Nice service, REAL hymns (as opposed to Vapid Mooings), a sufficient turnout (in some respects -- certain constituencies need a collective head-slapping, but what else is new?)...excellent sermon by the Brand-New Dean, to everyone's enjoyment...and pleasant conversations following, until the Cathedral Verger turned the lights out on us in a marked manner at 10 p.m. As he was amply entitled to do.

Enjoyed watching --and hearing-- Daughter Unit and Wonder SIL and their accomplices augmenting the cathedral choir during the service, and relished the opportunity to admire DU's New Frock afterward -- said garment registering about 73.5 Hepburns on the Classic Fashion Scale. (Audrey, i.e.)

Slept fitfully ... woke early and piled up pillows and completed the crossword of the day in my NY Times Crossword Calendar (Mondays are easiest)...and then, feeling encouraged, finished off the TLS Shakespeare Acrostic. I had forgotten how much fun they are to do.

Time to go bash upon the laundry some more, turn on the shredder, generally fill-in the phone-call-expecting time as productively as possible!
Posted by Crimson Rambler at 9:07 AM 2 comments: