words to live by 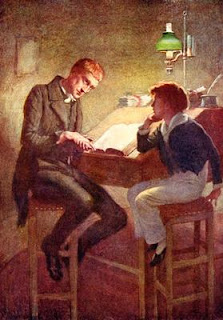 About four years ago I encountered an organization that I'd never heard of before. At the end of the day on the Feast of Sts Peter and Paul I was in the Trastevere district of Rome to attend the Evening Prayer service of the Community of Sant'Egidio, which you can read more about HERE. It was an amazing evening for a great many reasons, and I've checked into the Community website from time to time since then.

Last winter sometime I found a wonderful phrase cited as the slogan for one of the Community projects (I think it was an art show): "Abbasso il grigio!" Or, anglice, "Down with gray!"

It has stuck with me.

Not just in terms of my own feeling about the colours of cars, as I was mumbling about yesterday, but about a great many other things.

And one of those other things is liturgy.

The topic comes bubbling up in this locality, generally, when we have had a particularly ornate diocesan service such as an ordination. "Too fancy, too long, too elaborate, (occasionally, too much smoke), too much music, too many vestments..."

It's hard not to hear, in these complaints, "too beautiful" -- "not gray enough."

I recall vesting in close proximity to a colleague who expressed intense bitterness, sotto voce, at the splendour of some of the vestments. I think it was the Canons' and Archdeacons' copes that set him off specifically.

"I just hate all this fanciness and dressing up," he said, "because after all I'm just a Humble Pastor, myself."

I couldn't think of a single civil reply. What I'd have said if I could, would have been, "And what's the point of all that humility, eh, Reverend Heep, if NOBODY SEES AND ADMIRES IT???

But that might have been construed as unkind. Because it would have been.

The usual somewhat diffident defence for "fancy and beautiful" in our celebrations goes something like this, "well at least I suppose it shows people that we think the things we are doing are important." And then the special celebrations are compared, not always to their advantage, with the "humdrum everyday" realities of parish ministry -- including, I think, parish worship. In other words, "il grigio."

And that if I am prone to being struck dumb with awe at the sight of Archdeacon Stoopnagel's Sunday-best cope, or at the sound of the cathedral choir giving Wm. Byrd a run for his money, then that is a happy foretaste of how the good Archdeacon will look to everyone, and the cathedral choir will sound, sub specie aeternitatis. I say "Fie" (I do, too) on a professed humility which is no more than carnal envy and spiritual pride and probably acedia as well, all in sneaking and slinking mode.

Amen...And when you finally cross teh Atlantic to be a guest preacher at church in the valley, I promise we will celebrate with a procession, copes and smoke so thick you need fog lamps!

I am a big fan of "Down with Grey." There is enough naturally occurring grey without our encouraging it.

Hi Jim! I used your line about what David should OF been doing rather than lolling about on the roof...!!!

Song in my Heart said...

This reminds me of being in schools where putting my hand up and responding in class or getting excited about learning new things marked me out as 'not cool', and of some of my students who take ages to warm up and let themselves enjoy learning. It reminds me that if I am very happy about something and start singing or clapping or skipping about with glee, people think that is really rather weird, so that I hardly ever do any more, at least in public (thankfully as a musician I can defer until I am "practising" and nobody is any the wiser). It points out my attempts to make good food for a friend but to downplay the effort that went in because it might make her feel awkward. It challenges my tendency to grow only edible plants in my garden, a sort of dark utilitarian refusal to allow the frivolous abundance of lilacs into my life.

I wonder why we are so jaded, so unwilling to celebrate, so uncomfortable with our own joy. I think maybe it is because we are afraid.

And I think I am going to get some lilacs for the front garden. Fancy ones, with stripes.

It's really nice to "dress up" once in awhile - and why not make at least some (many?)of these occasions ones where we are giving our best to God....