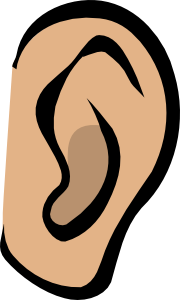 Sitting in the office yesterday and listening...my office is an architectural Swiss cheese: a door into the chancel (actually to the East of the altar rail, affording a secured route for the offering plates and for the unconsumed Sacrament, at appropriate moments) -- a door into the General Office, habitat of Wonder Secketry and various gadgets and debris as best depicted by the immortal Dave Walker, passim; and a door into a kind of Miscellaneous Lobby/Vestibule containing storage cabinets, a wardrobe for vestments, and a giant cupboard known unaffectionately as "Queequeeg's Coffin" which holds the off-season dossal curtains and un-fold-able altar frontals etc. So people can run in and out of the rector's space fairly freely. And whatever is happening in the western two-thirds of the building is audible here also.

So I was listening. And I thought: "The people of God are about their work." The Practising Pianist was hard at it on the grand piano in the nave. She has added something new to her repertoire, and I was hearing the first tentative run-through of some ragtime... And the Old Guys That Fix Stuff were hard at it in the back entry, which is one or two or three storeys tall depending on where you stand. They were painting. This involved building some splendid home-made scaffolding, and lashing it enthusiastically to various comparatively fixed points in the structure of the building. The space has been a dismal institutional yellow as long as I've been here -- the upper reaches sooty and the lower parts grimy -- it is about to be a beautiful clean cream colour (at least temporarily!). And they were hooraw-ing and arguing with each other loudly and with great good humour. TBTG, nobody has fallen off any of the ladders, OR off the scaffolding.

A happy and comfortable moment.
Posted by Crimson Rambler at 9:27 AM

What a beautiful moment!

Swiss cheese office...yikes...but the rest I was picturing and smiling as I read. :

It's good to have those people in the church, isn't it? And overhearing music practices was one of my favorite parts of being a Wonder Secketry, back in the day.