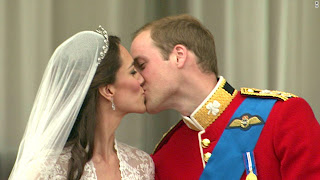 With kathrynzj's help, here is a Royal Wedding Friday Five:

1) Will you be watching? If so, is this your first royal wedding?

Watching, oh my yes. I woke up at 1 a.m., but realized that the next three hours (Mountain Daylight Saving Time) would consist entirely of variations on "OH ITZHAK this is SEWWWW exciting" ~~ a family-cherished line from the Three Tenors' concert in L.A., years ago ~~ so went back to bed with the alarm set for 4, and was up in front of the TV with Nefertiti the Loyal Cat in time to see Catherine enter the Abbey. Watched, on the CBC, until they closed the doors to the balcony.

NOT my first royal wedding but maybe the first one I watched right through? We had a cassette tape of Charles and Diana's wedding, including the encouraging whispers of the Archbishop to the couple, which I found very touching.

I do remember watching the Coronation on television in '53, and for me, also it was almost the first television I saw. Also in the Abbey.

I paid attention to Charles and Diana's wedding out of identification with the couple -- this time around, it's all about the officiating, the preaching, and the music.

2) The bride has chosen as her wedding cake a fruitcake. Where do you stand on this pastry?

I am really sorry that so few of my contemporaries apparently have ever encountered GOOD fruitcake. (The criteria are: don't stint on the candied fruit and don't stint on the BOOZE.) From where I sit -- nothing else IS a wedding cake. Ideally, it should have been baked and set to "ripen" before Advent 2010 and even so it would be a bit "new" at this point. It's a confection more than a "cake" -- and it's concocted so as to last virtually forever without spoiling or going stale. I like other kinds of cake just fine thank you, qua cake, but not for Christmas and not for weddings. Too....flimsy.

3) The dress code for royal weddings has not seen the same sad decline as that for most other weddings. If you could design your own royal wedding hat, what color would it be and what special decoration would it feature?

I guess at this season of my life the hat would have to be red! With maybe a nice silk rose. But I have very poor luck trying to find a ready-made hat to fit the size 8 head I came equipped with.


4) Any chance the Archbishop of Canterbury is using a Sustainable Sermon (tip of the mitre to the Vicar of Hogsmeade)? What would you tell the couple were you offering the homily?

I was sorry not to hear +++Rowan preach, but it was interesting to hear +Richard. I thought he could have preached better with the material that he had -- which I liked, both the quotation from Catherine of Siena and the quotation from Chaucer, which was gently mischievous.

Probably, though, until all memory of The Princess Bride has evaporated, glittering prelates should not begin their sentences with the word "Marriage," even without a lisp.

I think I would have been more likely than his lordship was, to have drawn helpful analogies from baseball.

And I am fond of the theology and the language of the Book of Common Prayer...which repays mulling over in memory. I like the idea of children "Christianly and virtuously brought up." I like the idea of "amiable" wives. I like "troth" -- "either to other".

5) Believe it or not, kathrynzj is getting up early mostly to see the wedding dress. By the time this post is up, the world will have seen it. Did you like it?

Very much -- it FIT, hurray; and otherwise, I'm with Martha on this one, SLEEVES, oh thanks be to God. If it starts a trend AWAY from the strapless...it will be a great favour to one and all especially clergy who often have to stand one step above the couple, confronting more decolletage than is healthy (20 pounds of custard in a 10 pound basket...ewwww) And I liked the understated veil, understated bouquet, relatively abbreviated train, discreet tiara.
Posted by Crimson Rambler at 8:21 AM

Ah finally someone who appreciates REAL fruitcake. Yes on the booze and REAL butter and my trick is to leave out citron since a lot of people dislike it.

oh Joelle, I was once given a WHOLE half-citron, candied, which I was able to cut to a size that suited me...it wasn't dry and nasty at all!

I too like fruit cake, but being so American, I did not know it was a traditional wedding cake - like the idea of a hearty substantial cake as a symbol of marriage!

And really, dispite by Facebook critique of the male pronouns and the "quiet" woman...I really enjoyed the ceremony.

Crimson, we must be of the same age. We both remember the Coronation as some of our first tv.

I am hoping for that email you promised me.

I am with you on fruitcake--most of us in the lower American have never had good fruitcake. But here in TX we soak ours in bourbon. Nor are they at all familiar with real Yorkshire pudding.

But the crack about the 20 lb pudding here absolutely toppled me! Agreed! ;>D