Friday Five: I Ask for Help 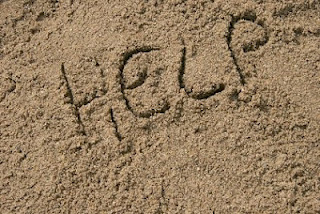 Thanks to Martha Spong over at RevGalBlog Pals, our instructions:

So, for this Friday Five, please list four ways you have been helped when you didn't want to ask for it and one way you had a chance to help that meant a lot to you.


This one comes awfully close to the bone, for me.


1.  A little past midway in my seminary years (the MDiv was a three-year course but it took me seven years to complete, part-time), one of my faculty advisors gave me the task of setting my Learning Goals for the year ahead.  "EH?" I said.  "Learning Goals?  What means 'Learning Goals'?  Not understanding.  Passing courses, yes.  But YOU set Learning Goals, I meet them."  She wouldn't have it.  Finally she set one for me.  "I want you to LEARN how to ASK FOR HELP WHEN YOU NEED IT."  Further resistance on my part.  "But it's WRONG to ask for help.  I'm supposed to do MY OWN WORK. (Besides, who'd help me?  Ha.  Nobody, is who)..."  So I was helped in the first instance by being TOLD to learn to ask for help.


2.  In the meantime, I was struggling with my tax return.  Actually, staring paralyzed at it.  I had always filled out my own tax return.  But in that particular year, I had to report a Capital Gain, and I had NO idea how to do it...I knew I was owed a rebate, so there was no problem about late payment.  But the weeks rolled by...and about October, one night, lying awake fretting, I remembered that one of my seminary classmates was a Chartered Accountant.  "ah"  I said, "I'll bet HE knows what to do with a Capital Gain.  I shall ASK for HELP."  So expecting to be yelled at for Not Knowing How, I asked.  "Yes,"  he said.  "MMM-hmmm," he said.  "Give me your papers," he said.  And that was the end of the problem, right there.  No yelling.  No scorn.  Just "MMM-hmmmm" and a nice welcome rebate cheque in due course.  Amazing.


3.  Casting a lot farther back -- I remember the summer before I started university, at the lake with a group of other young folks, splashing around in the water just off the end of the dock, I -- non-swimmer -- stepped into a deep spot and couldn't find my footing again.  (I recall it now, vividly, when I see those information features about "Drowning Doesn't Look Like Drowning.")  I was struggling but not saying anything, when one of the girls about six feet away asked quietly, "Are you in trouble?"  I managed to nod my head, and without any fuss she had me into the shallow water in an instant...  "No problem," she said.


4.  This last week I was confronting a funeral in the parish where I'm doing interim ministry.  At one point it looked to me as though I was responsible not just for officiating and preaching and pastoral care but also for organizing (and possibly preparing!!!) the post-funeral lunch (70 people), and the funeral leaflet, which was complex (with reluctant, unfamiliar computers and unreliable internet)...and then all in one day the parish lunch-committee reported in (returned from vacation): "We're on it" -- and the funeral family announced, "We're making the leaflet, tell us what should be in it."  And there I was, free and clear to do what I DID know how to do.  The most wonderful feeling, when somebody else just comes and cheerfully TAKES AWAY a task you don't know how to tackle.


Times when I have been helpful.  Hmm---well, I was visiting an older parishioner whose divorce settlement had not been particularly generous although her (ex)husband was very affluent...she was expressing her worry about making ends meet on what she was allowed; and I enquired about a detail of the allocation of pension benefits...and encouraged her to consult her lawyer again -- it turned out he had missed a provision that was a matter of law, NOT negotiation; her income was substantially improved and she was also paid a big chunk of "back pay" -- she seemed to think that was pretty helpful!!!

Posted by Crimson Rambler at 11:37 PM