Of solace, and ospreys. 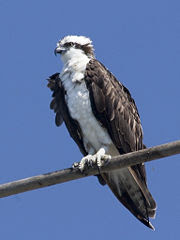 Allow me to introduce Pandion haliaetus, or the osprey, in its North American form.

I look for ospreys when I am on vacation especially in my favorite East Kootenays stamping ground. There is one stretch of highway where, in June, I saw at least a dozen osprey nests on nesting platforms or bridges -- and where, one morning, I saw three PAIRS of ospreys all soaring over the wetlands at once. Much joy.

Now. You must imagine one of my parishioners. This man has a great attachment to the movie in which Sidney Poitier plays the handiman to a convent of nuns in the desert (Lilies of the Field, perhaps?) He especially savours the line, "I done built you a chapel."

So he tends to show up here at the church saying things like, "I done bought you some paper towels"... It is now a received joke between us.

He has heard about my fondness for ospreys; and this morning he approached me with a paper bag, and a large grin, and said, "I done brought you an osprey."

And so he had. It is one of the Audubon Society stuffed bird-model series.

And when you squeeze its middle, it makes an ornithologically correct series of squeaks and squawks.

I am greatly comforted.
Posted by Crimson Rambler at 6:06 PM

Labels: all creatures of our God and King, Gratitude

A wondrous fact about ospreys: when it is time for their young to leave the nest, they deconstruct the nest. Of course, that makes it difficult for the young to return home after being launched. We did a similar thing when I started seminary and my youngest left for college. We sold the house and moved into married-student housing near the seminary. My various young return for visits, but none have expressed an interest in moving back in.

So perhaps we should be as wise as ospreys.

I did not know that, it is still more wondrous and would explain why the unoccupied nests in June were so extremely derelict.
I do so love seeing all the little osprey-heads poking up out of the mess of sticks, though.
A great bird.
Thank you for this bit of osprey lore!!!

Oh thank God it wasn't alive... or formerly so!

Oh I don't know...don't you think Vestry meetings would proceed more...expeditiously...if I were chairing them with Os perched on my wrist???