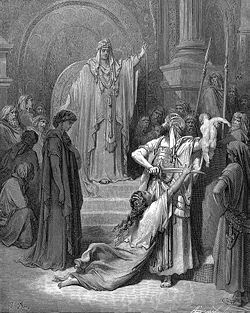 - Vestry meets tonight (aka Session, Parish Council in other jurisdictions).
- we have 200 nice new chairs, and one of the two most cantankerous and difficult members of Most Holy and Undivided (not counting the Rector) is delighted with them; this cuts the endemic grousing off at the knees, so to speak (what's a few mixed metaphors among BlogPals?)
- Funeral on Wednesday, this week. The family have asked me if it would be possible to "have a quotation from St. Paul." I waited to hear what "quotation" -- but no. Just "a quotation" -- because "Paul was one of his favorites." As we read most of First Corinthians 15 at an old-style BCP funeral, I confess I was Wholly Bemused by this request. (Not to mention, "I am persuaded, that neither death, nor life...") So I think this is going to be a Teaching Homily moment.
- I really really don't know where people are coming from, any more. Are they Unchurched, Dechurched, Open Dechurched, Closed Dechurched...what? One of those moments when I realize what is meant by the "evangelism inside the walls."
- tomorrow the Knit-Wits will gather -- and celebrate the 90th birthday of one of our matriarchs...a retired head nurse of Scandinavian extraction = a truly formidable character. I will be honoured to share their coffee and cake.
- Friday night was an enormous treat -- Eldest Son and Comely Lady-Friend and I joined SIL's parents for a production of Handel's oratorio "Solomon," which SIL was conducting -- Prairie Metropolis's Big Choir (100+ singers) and a Baroque orchestra, and five exemplary soloists, three imports of international standing and two local singers who more than held their own in the company they were in. During the intermission I encountered a former parishioner (another parish) who up until eight p.m. Friday night had never even heard of a counter-tenor. She was in deep shock, but bearing up well.
- baptisms yesterday -- two little children whose parents were married here since I came to the parish...the younger child has an older brother whom I also baptized. The service went well and the babies were adorable and lived up to the Parish Myth that they stop crying when the Rector gets her hands on them.
- and then a run to the supermarket while the rest of the nation was glued to the PRE-GAME SHOW, and finally #1 Son and I settled down to watch the annual Gridiron Classic, aka the Grey Cup (think SuperBowl, only...well, um... better, actually).
- the beautiful and virtuous half of the country, i.e. the West, was triumphant. We try not to notice that it was embodied, this year, by the team from Rival Prairie Metropolis. A good game, nonetheless.

Bring on the rest of the week!
Posted by Crimson Rambler at 4:36 PM

Labels: Family, Knitting, Most Holy and Undivided, Mothers in Zion, Music, Our Holy Mother the Church

Believe it or not, when I was in the US Army many years ago, studying Russian, in a class of maybe 60 people (I was the only woman, and there were a couple of FBI guys, otherwise all military), there were TWO counter-tenors! And, we had a class once a week or so of group singing in Russian, with one of the instructors who supposedly had been an opera singer in his youth. He sure liked those counter-tenors.

you crack me up... the counter tenor shock... hilarious!

And remind me in case I forget, the mom of the female batismand (?) is going to join the choir at some point...

hilarious...oh and you can find me, in a far less hilarious state, at both my old blog and my new one:
desert prayer

another note, I have added a permissions feature to my new blog. If you wish to be added as a reader please email me at mompriestatgmaildotcom and I'll add you...