a peaceful day off, plus alarums and excursions 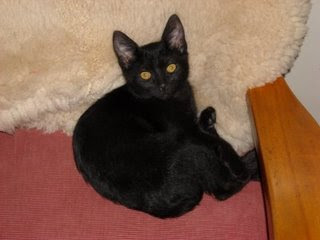 What with one thing and another, or half a dozen others, Friday didn't become the
"giorno di riposa settimanale" it is supposed to be, and so I took yesterday, all day, OFF.

It was going to be kind of a busy day-off: errands and housework and perhaps even an upending of the briefcase...

It didn't turn out that way, instead it was a day in which the total output of energy amounted to running the dishwasher once, cooking 1.5 meals for own consumption, and as for the rest, the clicking of the remote control, and a certain number of cups of tea.

I didn't try to go anywhere...probably just as well as the street in front of Tether's End is full of all-but-impassable ruts in the ice.

I did, however, feed Nefertiti the Wonder Cat first thing in the morning.

And woke, later, after the most recent nap, to think..."Gee...it's Awfully Quiet...I wonder where Nefertiti is." And then I couldn't find her.

There was running up and down stairs, there was opening and closing of bedroom, bathroom and closet doors, there was calling and chirping and rattling of can opener and food dish.

No stifled meows, no response at all. No cat.

I had just decided, totally heartsick, that she must have slipped out between my feet when I brought the mail out of the box by the front door... and I was trying to think HOW I was going to tell the clan that I had Lost The Kitten...
when she emerged, all good cheer and nonchalance from behind or under something down in the playroom.

And then we had Giant Cuddles and a lecture on why little kittehs should not HIDE when called because it Frightens Ma.

The rest of the day was unexciting.

This morning, however, I managed to get Harriet-the-Echo well and truly bogged in the deep ice-ruts in front of the house, with just her nose in the driveway. Pushing, pulling, rocking, sanding, shovelling and swearing to no avail...eventually the Motor Association was enlisted, a large tow-truck arrived and hoicked her out like a baby tooth and we were on our way again! (Quoth the tow-truck driver, with an evil grin: "You're not alone, this morning...")
Posted by Crimson Rambler at 1:07 PM

Labels: all creatures of our God and King

I can't describe how sick I felt when I tho't she had gotten out...