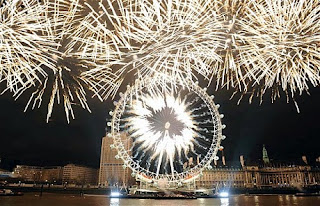 Here we are in a new year -- and I am brooding over schedules and priorities and calling and resources and eternity (and wonderin' where the lions are), and like that.

And I'm also conscious of diminutions rolling down upon me (just watching, or listening to, Indiana Jones and the Temple of Foolishness, and, yes, seeing Big Stone Rollers in my path too), so, let us see, maybe this year.

What else? Kitchen clean, every night by bedtime. Bedroom tidy every morning before I launch upon the day. Bathroom clean, every day. Laundry done up and finished, every Monday, for the week. Little cat, and house-plants, attended to every morning before I have my own breakfast. Grocery shopping organized, once a week and once a month for "big stuff" on the 10% discount day. And I rather think I'll have a go at making my own bread, again. I don't seem to use very much, I think I can stay ahead of it, and I like to do it.

I'm investigating how long my "staples" last me -- a jug of dishwasher detergent, a big jug of laundry detergent, a three-pound box of margarine, a big bottle of shampoo. (A tank of gasoline, for that matter.)

Some time every day for journal, and letters, and this blessed blog. Some discipline about responding to emails and letters and phone calls.

I have dreams of a great grandiose LIST of everything that needs doing, organized in one place, so that I can ration it out and come to an understanding of what constitutes a day's work, so I know when I can feel entitled to quit and rest, or quit and play.

Because at 67 I don't think it's morbid to reflect that most LIKELY I have already lived more of my life than I have left before me, and it behooveth me not to waste any of the latter?

Fabrector, my boss, is away from the parish for a bit, so this morning's liturgy was in my hands. We had a happy time with the Naming of Jesus. Then after the second service I went and made a pastoral bedside call. I still struggle with the pastoral etiquette...do I ask whether I MAY come, do I announce that I AM COMING, how do I hear what it is, that the person on the phone is hoping I will say next? and utter it? The man I went to see is in the process of dying, at home. But not quite as imminently today, perhaps, as his wife thought he was, last night.

And so home, and a Beautiful Breakfast -- a couple of eggs omelette'd up with onion and celery and jalapeno and pre-baked potato cut up, and a piece of ham dolled up with some cranberry juice and a few raisins.

And then sleep, naturally. But I did not, I WILL not, lie down on the couch. I may doze off in my chair (and I did), but otherwise, sleeping is done IN BED. NOT, on the couch with the lights on and the TV roaring.

And, gulp, no more computer games. Except Sporcle quizzes. I mean, after all.

what's left, this evening? a salad supper; kitchen tidying; thank you letters; a couple of pastoral phone calls; and to bed, betimes.
Posted by Crimson Rambler at 3:54 PM