It's been a while.  Not sure I like the new format here into which I am supposed to insert my deathless prose, but here goes.

Some weeks, or months, back when, I fell asleep on the sofa after supper -- a habit I've tried to break -- and when I woke up in the small hours the television (still running) was about to show us the Queen's Diamond Jubilee Thanksgiving Celebration from St. Paul's Cathedral.

So having had several hours sleep, after all, I decided to assume a more upright position and watch the proceedings.  You probably watched them too, or excerpts thereof.  Nice music.  Nondescript weather.  Pretty fair sermon.

But what got to me was the sight of the Queen -- lady in waiting having evaporated somehow as they got out of the Bentley in front of the Cathedral -- stumping up the long stairs behind the Lord Mayor... because what I could see was an 86 year old woman going to church all by herself, after all those long years, because "the old man" was in hospital and too sick to come to church with her.  How many dozens of them have I encountered since I began my ministry?

So I was feeling quite sentimental about Ma'am, and thinking about the infamous BOXES which she attends to every day, filled with state papers. 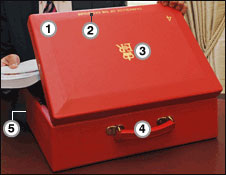 And it occurred to me that if she could do it, I could do it.  So I unearthed a suitably sturdy cardboard box; not having any red baize, or morocco leather, on the premises, I found a big scrap of the most horribly 60's citrus-coloured terry-cloth from a long long ago sewing project, and with a stapler and a glue stick I covered the box in this ugly, ugly (but serviceable!) fabric.  Eventually I found two surplus metal buttons, the kind on stalks, and attached them to the flaps that close the box, with a loop of elastic to hold them closed.

And this is how I deal with the mail, and the bills, and the flyers, and the great BLEAGGHHHH mass of loose bits of paper that infest and disfigure my life and my abode.

I hurled the whole works into the Royal Box.  And regularly, I tackle it.  The aim of course is to "handle each piece just once and be done with it"... you know the drill.

And tonight... I got to the bottom of the box.  Tomorrow will be a fresh start.  Hallelujah bananas, and God Save the Queen.
Posted by Crimson Rambler at 9:44 PM

Great idea...although I tend to open mail immediately, and then put the "must be shredded" stuff on the shredder, recycle the junk, and file the bills - right then and there. I guess I just don't get much mail...

On the other hand, my pile of work (er, crappiness) is usually stuff I bring home from work to, you know work on, but don't and then forget to take back to work...eventually it all goes in a pile and back to the office...a roraly box for work is a great idea...

the best and most productive priest I ever knew, Terri, came and went from the church with his hands in his pockets...he not only did the work of the day in the day, he did it in the place where it met him -- he carried NOTHING. It was inspiring!

Love the Box Idea - I need to do something like that also - I end up with stacks of paper and postcards of stuff I want to "look at more closely" - it piles up in my home office. I usually go thru it about once a month, but it would look better boxed than stacked. Thanks for the inspiration. Happy Birthday!!

I'm working on carrying virtually nothing home come the fall! And this is a useful reminder to keep the things of this earth within bounds (or box).