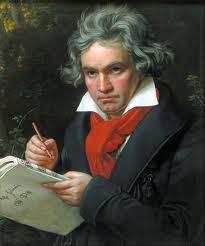 Today was a very quiet one, chez the Rambler.
Did a bit of kitchen clean-up, sifted and sorted a tremendous quantity of paper, got the finances somewhat into line – read for a while, wasted a certain amount of time, and eventually picked up a friend to go to a concert.
The symphony orchestra based here in Prairie Metropolis has just returned, trailing clouds of glory, from their first ever concert in Gotham City.  Not surprisingly, there was a conspicuously larger crowd at tonight’s concert than earlier in the series.  Accordingly, many of the newcomers would appear to be concert-going neophytes.  And this has to be good news, in the Big Pick-cha, but…

And it was a gentle, pleasant concert.  A bit of Haydn (“The Creation” – the “tohu bohu” part) – then two violin concerti, one by Leclair (first time I’d ever heard of him but he was securely seventeenth century) and one by Bach.  Visiting violinist, also new to me but by no means new to the violin.
After the intermission, the Beethoven Sixth Symphony.  Remembering over tea after the concert how my parents bought the boxed set of the Beethoven nine, with Toscanini conducting the—I think—NBC Symphony.  Back when networks used to have their own orchestras, children.  We played those LPs until we could almost hear both sides at once.

It was a delight to hear the “Pastorale” again, live.  First-class soloists among the woodwinds, nice lively ensemble work; despite the familiarity—good energy all the way to the end.

So I have come home happy.  Some years ago I came to an agreement with the world, about music.  I like music I’ve heard before.  I am perfectly willing for musicians to play music I have NOT heard before.  But nobody is to expect me to give myself a strain trying to like it.  If I DO like it, on first hearing, well, that’s a bonus.
And that is all for today. Tomorrow, a meeting on homelessness, and then back to St. Curious Too for the afternoon.
Posted by Crimson Rambler at 12:15 AM

hi. nice to be back reading your blog again. I'm going to try to be better about reading.