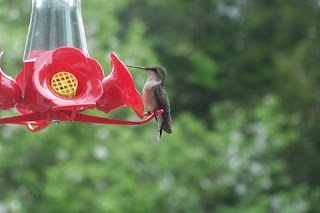 A glimpse of our time away last week...fun to watch these little guys zipping about!(Picture is by Daughter Unit!) You can check her comments on our trip right here.

I have a quiet afternoon and then a major meeting this evening, after which I pack for next week's sojourn away. I am flying at noon tomorrow to Adjacent Province, all in among the Pointy Bits of the eastern interior...and will spend three nights in "beautiful church place" leading this blessed retreat...back here with a huge load before me including two weddings next Saturday -- help!!

Struggling to find what might be most central and/or most interesting in Jeremy Taylor...I suspect it may be the pastoral problem of people who have committed themselves in faith for reasons which are intellectually flimsy or specious. After a lot of struggle himself, he concludes that it doesn't matter WHY we believe, only THAT we believe. But it is a struggle, for a properly educated Christian Humanist, to concede such a thing. (Them as was in authority told me all about Christian Humanists when I was only 18 years old; nobody told me the last one died in 1674. It did sound like one heck of a great gig, though, SIGH.)

I'm thinking of questions I've seen raised by the RevGals -- when do we put the pastor on hold for a moment in order to become the theological teacher?
Posted by Crimson Rambler at 1:31 PM

I want to go on a retreat. I haven't ever been. Is it fun? Relaxing? Can you forget everything that you haven't done back home?

Retreats are great if you don't have to lead them or be responsible for looking after sick retreatants, finding toilet paper in the middle of the night, or shifting rooms when someone needs to be closer to the bathroom.