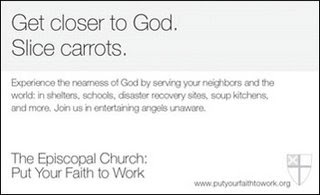 A tip of the Crimson crash helmet to Pseudopiskie for this one!

I am putting together my notes for this week's retreat on Anglican Spirituality, of which the focus is Jeremy Taylor. You may expect to see Taylor-isms in some profusion in the weeks to come.

"As our life is very short, so it is very miserable; and therefore it is well it is short."

But he would have liked the carrots-idea. He isn't a Pelagian, by any means, but he just isn't so frantically Augustinian as some of his contemporaries. It's not altogether enough to say you repent, and to say you have faith...let's see what you DO, and slicing carrots would be right up his alley, God rest him.

The trip to Our Nation's Ca-pi-tal and its hinterland was a great comfort and a good break from routine. Saw all my sibs and their spouses and their several sons; we had sunshine on the interment-of-ashes, and then "Daddy and Mother took us out for lunch, one more time..." at a very, very fancy-schmancy restaurant, menu written in the foodie equivalent of Linear B...so lots of hilarious conversation with youthful nephews: "what on earth do you suppose that might be?" And the food was lovely.

You know what is nice? What is nice, is a Customer Serviceperson, answering the "lost or stolen credit card" phone on a Saturday morning, who starts her response to one's lost-card plea with "Oh Noooooo! That's terrible!" and then gets on with the cancelling and the notifying and the replacing and the verifying.

Thanks be to God, there's been no untoward activity on any of the cards so far cancelled. AND I now have a temporary, but legal, driver's licence again...they tactfully did not ask me HOW I had made my unlicensed way to the issuing agency...(wink)
Posted by Crimson Rambler at 12:18 PM

Welcome home! I'm glad that your travels were good. I hope it doesn't become too much of a nuisance to restock a new wallet with all those lovely things that fill a wallet!

Glad you are back safe and sound. Tagged you for a meme at my place...

It's nice to have you back. I liked the clip about cutting carrots.