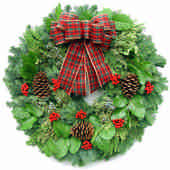 Finally this morning there was Nothing For It but to make the Hideous Great List of everything that I really WOULD like to have behind me by 7 p.m. tomorrow evening...

So far I've been to the bank, deposited a comforting quantity of cheques...
looped around past the dry cleaner and dropped off a blanket...and managed to corner a Christmas-tree dealer who hadn't yet given up on the market and shipped his wares off to the chipper/mulchers. We agreed on a very handsome tree, not too darn big, for about half its hoped-for price, and managed to wedge it into Harriet-the-Echo's hinder parts, and I got it home without its falling out on the freeway or anything tedious like that. So I do feel quite triumphant about that bit of the list.

Also got to the Post Office and bought a tremendous wad of stamps. Yesterday's mail was a chunky handful of cards, some with pictures, many with letters...which somehow stimulated a great if belated surge of affection and desire-to-reach-out. My ambition to write Christmas cards was flagging a bit, but "it's ba-a-ack."

Also in the mail, the New Yorker and Times Literary Supplement, the latter with lots of reviews of books about Christianity under various headings.

At bedtime and on first waking, these days, I'm reading the new biography of Gerard Manley Hopkins, in small-ish chunks. It gets better, or I get more attentive, as it goes along.

At the end of last week I took two unofficial days off...did some satisfying house-cleaning, and as part of that I rounded up all the most recently arrived theological books and coalesced them into a knee-high stack next to the sofa. Impressive!

It was just So Cold...thirty-five below on Friday, and only a little better on Saturday. A time to "cocoon," and I did.

Sunday was double-time busy, though -- the two services in the morning, with surprisingly good attendance given the weather (it hasn't really broken, and won't, now, until after Christmas) -- then my monthly communion in a seniors' residence, "exercising the priesthood" and seeing again that "having come" I've really done it all...the communion is just a bonus.

The residence is just a couple of blocks from one of the acute-care hospitals where a parishioner was languishing, so I was well positioned to get in for a flying visit with her (and her daughter, during intervals of temperature-taking and blood-pressure-reading). Word came this morning that she's being discharged for home today. A heavy fall on the ice last week so jarred her poor "innards" that she had a gall-bladder attack...the first time I've encountered that particular chain of cause and effect!

Then after the hospital visit I paused for a break and then back to MH & U for the "Ladies' Wine and Cheese" which was elegant and lavish but not as well attended as it should have been. Never mind, the Sanctuary Guild polished off the leftovers the next day after their decorating binge.

And the day closed with the annual Choir Christmas Party...great food, lashings of drink (lots of Designated Drivers!), and a tremendous carol-sing with much mirth, for which I was plenty ready, by then.
Posted by Crimson Rambler at 11:15 AM

Carol singing with mirth...ah yes! I had some tonight, at the prison of all places! I feel more Christmasy than I have for days and days.

Sounds excellent - though I'm envious that your theol. books awaiting don't yet reach the ceiling,as I fear mine would if I could uncover them from amid the chaos to actually pile them anywhere.
Delighted that Christmas feelings were produced by the postman, who currently makes me twitch with guilt at those things I have not done....

Have a very blessed Christmas - may all go well tonight and tomorrow! Merry Christmas!!