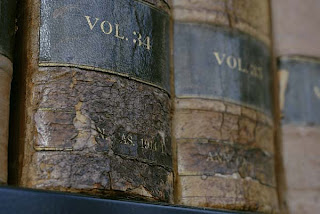 It's late, I've been napping since supper, now going to watch a re-run of NCIS: LA because I get such a kick out of Linda Hunt-- both her as an actress and her character -- and then turn in.

While I was back east for the Big Palaver mid-month I spent the night with friends. Going to these meetings is a conundrum for me -- our actual gathering starts early afternoon, which means that I either go down on "the red-eye", which I just cannot do any more, sorry, folks; or I go down a day early. That entails an extra night in a hotel. It bothers me to put that expense on the national church, even though I'm the only delegate on our side of the table from west of the Great Lakes.

Fortunately, close to the airport: a young couple, whose wedding I officiated, and their two little boys. So we had a fine visit, and I came away with a treasure -- a single volume of a set published in 1796 entitled A History of the Bible which my friends' church had decided to dispense with, in clearing the parish bookshelves. And it is hugely, unexpectedly, entertaining-- very scholarly, of its era, with very lucid explanatory notes and all sorts of lengthy citations from the Fathers and non-Christian ancient sources like Josephus, Suetonius, Diodorus Siculus, et al. I note, too, that although it's battered and somewhat "foxed," the binding holds together and the paper must be "rag," not the high-acid pulp product of a hundred years later -- still nice and flexible, however discoloured.

This volume begins with the "morning after" the Transfiguration -- which, says the author, took place AT NIGHT. Stands to reason, why would anybody schedule such a spectacular light show in the middle of the day? come on! At any rate, Jesus and his friends come down the mountain to confront the father with the lunatic/epileptic son, and the whole ministry of deliverance, including those nuisances which can "only be driven out by [drum roll here] fafting and prayer."

I know I'm getting old when I realize how much amusement I am getting out of something as simple as the "long S" in typography!!! And I'm led to think a little about what kind of a "Faft" would be truly appropriate to Advent practise. What shall I, must I, "abftain" from, to make room for hope, peace, joy, and even love?
Posted by Crimson Rambler at 10:59 PM

I never thought about the Transfiguration at night, but yes, yes of course!
fafting with you!