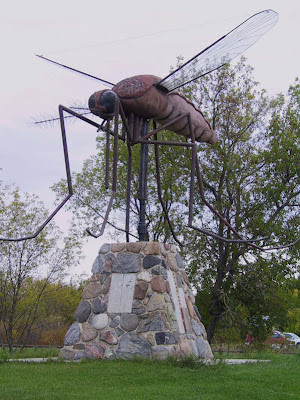 Jan has posted this Friday Five for us today:

After lots of rain and high temperatures, the flea population has mushroomed in Corpus Christi, TX, more specifiscally in our home! We have three dogs and one indoor cat, who have had their monthly flea treatments to no avail. Unfortunately, my female body is the one the fleas love to bite. So as you are reading this FF, our pets and ourselves will be gone from the house for 3-4 hours, after a pest company sprays all the floors.

With fleas on my mind and on my body, here is an insect-ious Friday Five:

1.What kinds of pests are in your neighborhood or area?

In this part of the country -- if you're not an agriculturist coping with grasshoppers and their nefarious kin, the great pest is the MOSQUITO [insert local joke about size of mosquitoes here].  Secondary nuisances include wasps of various sorts, the bane of folks who love to spend the summer on their patios or decks, especially eating and drinking thereon!


Every spring there is great speculation in the media, locally, and in casual conversation, about whether the weather is dry enough to discourage the hatching out of mosquito larvae, whether the rain (also greatly desired for other reasons) has enhanced their numbers, whether a late frost might discourage them, and so forth -- along with the usual recriminations against the civic authorities for having budgeted too little for insecticide spraying, or having budgeted too much (from the environmentally-concerned), or having spent all the mosquito-budget on snow-removal in the preceding winter months, and so on, and so forth.

3. Is there any pest that was new to you when you moved to a new location?


When my family moved from the West to Northern Ontario, Pre-Cambrian Shield country in the early fifties, we were astonished and appalled to make the acquaintance of the "blackfly," notorious in story and song.  Blackflies swarmed humans and pets alike, and where the mosquito left behind a small itchy lump, the blackfly took a chunk of flesh and flew away with it, leaving a bloody mess behind -- which then also swelled up, frequently became infected, ached, and was VERY slow to heal.  I remember seeing a workman in the local Provincial Park whose hands had been so bitten that his wedding ring had completely disappeared in the swelling of his fingers.

4. How do you treat insect bites? Are you allergic to any?

The time-honoured calamine lotion, or an OTC antihistamine if they're really troublesome.  TBTG, not at this point allergic to any.  And if and where wasps/hornets/yellow-jackets etc. are a problem, there is a wide range of wasp-traps, some of them home-made, which decrease their numbers!

5. Anything else you want to write about connected with insects/pests.

It's one of the ancillary benefits of forty-below winters that OTHER kinds of insect pests are not more prevalent with us.  Remind me of this, again, come January!

Posted by Crimson Rambler at 2:56 PM

Indeed, when I lived in a climate that had much warmer year 'round temps I hated the toxic critters that prevailed. I lived in constant fear of stepping on something, finding something had climbed (yes, scoprions can climb walls) into my clothing or shoes (which were never left on the floor), or encountering something on a (so called) relaxation walk. I'll take a cold climate any day...

Black flies are not what I'd like. I'm amazed you have a creature that we don't this far south, as we seem to have ALL the annoying ones in south TX.

I didn't mention TICKS which are a hazard in the grassland areas, and associated with Lyme disease etc.