I headed out to the immunization clinic on the 20th...got a "seasonal flu" shot in one arm and a life-time's worth of pneumonia immunization in the other, and figured I might defy augury...

That was Tuesday. Wednesday I drove to Outlying Community where I'll take up honorary post-retirement duties in January -- about 50 km. one way (30 miles). Had a good chat with the Incumbent there, including fine fish-n-chip lunch, and a drop-in at the Yarn Shop (woot!)--but oh, on the drive home I could NOT get warm again.

And I thought, "Well, drat; this is undoubtedly flu of some sort." Coffee with Youthful Colleague turned into supper with YC, of which I think I ate six bites before giving up and going home.

I was still amid what I was counting as a week's holiday time...but by Thursday I decided that I was going to extend that period. Wonder Curate dealt mightily with the events of the weekend and early week, including absence of Wonder Secketry, also with flu...

He is having some down time now...and although still coughing annoyingly, I am back, as is Wonder Secketry.

The rummage crew seem to have organized themselves all week without benefit of Rectorial Soop for once. The Visiting Archbishop came, preached, was lunched, and flew away again. This is all most consoling.

Time for me to creep back to Tether's End and more nugatory television...
Posted by Crimson Rambler at 2:47 PM 4 comments: 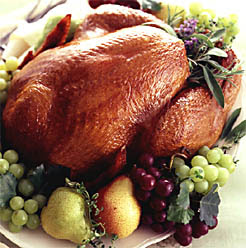 We have celebrated Thanksgiving in fine style here at MH & U, winding up on Monday night with another -- probably the last -- of the Rambler's holiday dinners. Each has begun with an announcement in church a few weeks beforehand: "Thanksgiving/Christmas/Easter is coming, and ... I HAVE A TURKEY" (OK, it doesn't resonate like "I have a dream," but I work with what I have, okay?)

Started this several years back when I DID have a big old turkey in the bottom of the freezer, going wobble wobble to and fro the way they do...and I thought perhaps I might draw, oh, a half-dozen waifs'n'strays to help eat it if I fetched it to the church on the holiday Monday and cooked it. The first thing that happened was that a senior member caught me at the door and whispered, "buy another one, you're going to have 45 people, trust me"...and every time we have had in fact about 40 guests. So it is two turkeys and a ham; the turkeys in the ovens downstairs (big old Garland gas range with 10 burners atop, JOY UNCONFINED); the ham in the oven of the house-sized electric range in the upstairs kitchen. And the Rambler trots to and fro, basting, until parishioners and friends and, indeed, waifs'n'strays, totter in, late afternoon, and bring potatoes and turnips and yams and salad and cornbread and PIE, Lord have mercy!

In the midst of the preparation on Monday evening, I took time to "just set" with the chief of the parish's Old Guys That Fix Stuff. The piano tuner had been in the week before, exclaiming again over the "niceness" of the Big Black Yamaha grand in the nave...the gift of Chief Fiser and his wife. So I thought perhaps I should pass along this good word, as Chief Fixer was looking rather worn. He has asbestosis, and it doesn't improve, and of late he's been on his portable oxygen continuously.

and then, after a pause -- "Mind you... it looks just fine. We were at the cathedral the other night for the ordination, eh, and I looked at theirs. And I though 'HUH -- ours is lots nicer!'"

And then we laughed. Some moments are just heaven.

And the turkeys were good and Knitting Lady's retired surgeon husband carved them to a fare-thee-well, and the ham was a thing of beauty too.
Posted by Crimson Rambler at 11:04 AM 7 comments:

for the Wonder Curate, newly priested, celebrating his first Masses this morning!
Posted by Crimson Rambler at 8:57 AM 3 comments:

Reflecting on the picture of His Grace in my last post (dear me, that sounds quite military and sad, doesn't it)...I remember my very first encounter with things Anglican, indeed with the episcopate in any form.

It was sixty years ago this past summer (merciful Heaven...the Rambler goes into Ancient Mariner mode here for a bit) "in a galaxy far, far away" -- well, no, but it was in the Yukon Territory, at a place called Carmacks, on the Yukon River. There was a coal mine at Carmacks, and my father managed it.

Along about midsummer, visitors arrived, by boat -- an "outboard" -- and stayed for lunch and for an afternoon's visit: the Anglican Bishop of the Yukon and his curate, the Rev. Randall Stringer (son of the Rt. Rev. Isaac O Stringer, "the Bishop who ate his boots." You could look it up). My Dad and Randall had known each other growing up in Dawson City, and they and my mother had a lively conversation around the table after lunch. But Bishop Adams sat down on the floor with me. We didn't play tea-party; but I had some plasticine, and he made me an entirely charming pig complete with curly tail.

I checked the Diocese of Yukon website just now -- he was a man of 70 when I met him. Visiting his diocese, in an open boat on a not-altogether-tame river through the wilderness...stopping wherever he encountered a human being...and taking the time to play with a little girl.

(And as my friends say at this point: "And then, you became ordained.")

Busy times at MH & U -- baptisms and confirmations scheduled for October 18th beting St. Luke, and parish anniversary, and the Rambler's 13th anniversary of ordination; we have young adult, middle-aged, and senior candidates for both sacraments as well as adolescents and infants.

And I have three major pieces of writing on my plate today along with Clericus, hospital communion service, wedding interview, and spiritual journalling meeting. Whee! More coffee is called for!
Posted by Crimson Rambler at 8:52 AM 4 comments:

Because nobody should live a minute longer without seeing this... 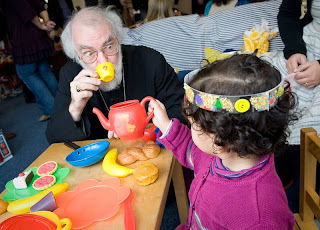 The very best picture EVER of +++Rowan, upon whom be peace!
Posted by Crimson Rambler at 4:40 PM 6 comments: 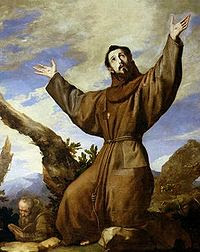 And with the help and encouragement of friends in the blog-i-verse, I'm going to do St. Francis for the children's talk and (gulp) the Gospel for the sermon...on the grounds, much reiterated by different folks, that it really isn't responsible to have that Hard Word read aloud and then just leave it unbroken.

I'm leaning very hard on William Willimon's sermon treatment here and a hat-tip and profound reverence to the Vicar of Hogsmeade for the link!
Posted by Crimson Rambler at 10:32 AM No comments: