...from the Spanish Main -- just to say all is well and the BE-ing RevGals are having a very, very fine time and wonderful talk and LAUGHTER...
SOOOOO glad I came.
That is all!
Posted by Crimson Rambler at 7:29 PM 3 comments: 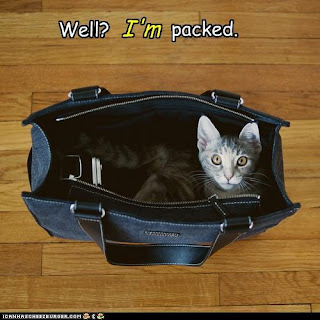 Unfortunately, I'm NOT packed, although the suitcase is out of the cupboard and preliminary internal partial lists have been made.

Once again I have complicated my life with a second obligatory trip, cross-continent, beginning within a week of our return from BE 4.0.

And there is homework for the second trip -- not just reading (I'm really enjoying Reframing Hope, but writing -- for a group who know a lot more about my subject than I do. ULP!

Sorting airline tickets, hotel reservations, INSURANCES, confirmation numbers, -- never mind, this is all going to be SO worth it.
Posted by Crimson Rambler at 7:05 PM No comments: 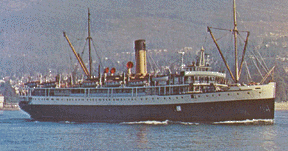 And this, up until 1970, was the Rambler's experience of Great Big Boats, the CPR steamship "Princess Louise." My mother and I went from Vancouver to Alaska -- I think it was always Juneau -- and back again, three times--two of those round trips were on the Louise. Strictly business, although this is now quite a favoured holiday cruise.

We were going "in" to join my father at whatever mining property was to be our new home; and in due course, we came "out," and stayed-with-grandma until there was a new mining property and a new home.

On our first trip, in the fall of 1948, Canadian Pacific steamship had just had a very damaging strike, and were anxious to rebuild their passenger business. As you can see, this is not a huge liner, but the service, the food, and the amenities were a la Cunard all the way. I was proudly just turned four, and I had never seen so much silverware on a table in my short life. It seemed to me a fine and tactful arrangement for a young woman who tended to drop her fork from time to time. There was always another one at hand. I remember too that there were "appetizers" while we made up our minds about dinner. Appetizers in 1948 were celery and green olives. Period. But I had never seen such big olives in all my born days, either. 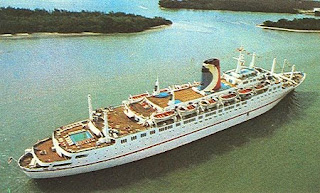 increasingly excited about the BE 4.0 -- maybe because the picture above is of the biggest boat I've been on to date--formerly the SS Empress of Canada, now--inevitably -- the Carnival Mardi Gras. The father of my children and I came back from England on the Empress in August of 1970. You do the math!!! I am not fully attuned to the idea of a boat as high-rise hotel lying on its side in the water. You may need to blindfold me and back me onto it. Just sayin.

...up early, after a pretty good night's sleep, to print off a bunch of paperwork for Big Committee Meeting this evening -- which looks like a long, weary way from here.

I did promise to keep everybody posted on the DOG situation, and meant to do so MUCH earlier.

Just after the most recent post I finally got to see the Ultimate Dog (Gordon Setter, for anybody who Hasn't Kept Up) in the flesh. Daughter Unit and I arranged to meet at a Dog Facility (daycare, exercise, training), in the unlit, unplowed, God-forgotten SE industrial zone of Prairie Metropolis.

I had an address, friends, and I found it, a door in a business strip-mall, no sign, no lights, no dogs. I considered the possibility of reversed digits in the address, and prospected further. Nothing. Back to the original address. Nada.

Now the next move, regularly, in situations of this kind (there have been others), is for the Rambler to stop the car, sit in the snowbank, and wail aloud. "Can't have a dog, NEVER going to have a dog, Can't even find the DOG PLACE, too stupid to be let to live," etc.

But before we got to that point (just), headlights appeared, heralding Daughter Unit, collaboration, strategies, and ultimately success. We approached the only illuminated facility in sight. We found a door unlocked. We halloo'ed for help. After minimal delay a cheerful youth in greasy coveralls responded: "Oh. Yah. They moved, eh? About four months ago? And Esmertilda didn't leave any kind of an address. But it's like, you go back up that way to the casino, and turn left, eh, and it's in there. Somewhere."

And we spent a happy evening watching various dogs work an agility course, including three (count'em) Gordon Setters. We had happy conversation with the breeder. We shook hands.

I came home to start work to make Tether's End dog-fit. Daughter Unit went away to MUSTER her siblings (a direct descendant of Queen Boadicea, this one, I think) to ensure their now-motivated Ma doesn't give up, as is her wont.

The problem, as simply stated as possible, is that in the last ten years I have deposited two entire professional careers' worth of books* into a 4 bedroom bilevel house which was already over-full of books. *and notes, and files, and PAPER. PLUS a serious consignment of Ancestral Books (and paper and linens and china and paintings and bric a brac) from my parents' home.

We have begun. Pray for us.
Posted by Crimson Rambler at 5:29 AM 3 comments: 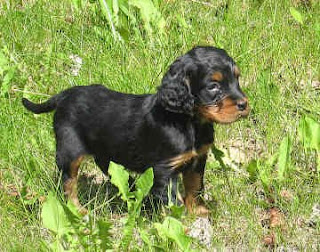 In case you're not aware, that header represents "screaming like a little girl."

I've been growing increasingly impatient with DITHER as a Life Principle, also its close relative, Shilly-Shally, and everything came to a head yesterday morning...soooo...I emailed the proprietrix of the kennel whence come the Gordon Setters.
Actually it was--I think--the recklessness of a fellow RevGal in posting up a pic of a Bernese Mountain pup. With bed-head. TOO MUCH TO BEAR, friends.

So after months of drooling over the kennel website, and boring all my acquaintances pallid with switherings and ditherings about Gordon Setters, I emailed the Kennel Goddess.

And she answered me. (Reprise on the screaming, above)

And this very evening, I am going to a hitherto unknown place to observe agility classes. With Gordon Setters. Being agile, presumably.

Thing is: I've never had a dog, not ever, not even a little negligible penwiper dog. I've always wanted a dog. Always. A big dog. Preferably a setter. And Irishes, although lovely beyond words, are, well, differently clued, right?

Hence, the Gordons. Big ol' black'n'tan dog. Yup. With a gentle expression in its eyes, says so, right here in the book. Kind of a dog-a-logue book, it is.

My boss, Fabrector, has lent me the Monks of New Skete book on puppy raising. Fabrector has a big ol' dog of her own, and he is trained to a HAIR and is all "Ma'am yes ma'am"...a great encouragement to dog ownership for the timid. Yesterday morning he went out of is way to demonstrate to me what a Good Thing it would be, for me to have one of my own. There was affectionate leaning on, there was affectionate cuddling, there were dog kisses, there was chin-on-your-knee with upturned-adoring-gaze. I would think he had hacked into my email...