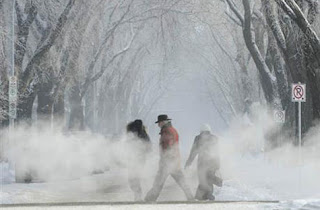 Temperatures hereabouts rose today to a balmy -17 C, it felt WONDERFUL.
Sunday and Monday, however, were something else again. Saturday was quite cold -- I took the bus to work, caught a ride home with Wonder Assistant...
And Sunday...I woke up at 5:30 a.m. and looked out on a street full of thick, still, fog. Arctic fog. Polar fog.
I set the thermometer out in the mail-box on the front porch and checked it 15 minutes later. It's the dial type, so not desperately accurate, but the needle was sitting against the pin below the lowest number, which is -40 (the point where the Celsius and Fahrenheit scales coincide)- I feel fairly confident that it was at least "fifty below..." given that there was ICE on the inside of the windows half the height of the panes. Ice on the inside of the front door, ice on the lock, ice on the screws that attach the knocker...
I went out and tried to start the car. Gallant noises from under the hood; but no "catch." Came in again, called a cab company and ordered a car for 7 a.m. Got ready for work. Cab arrived about 7:20, not bad, and took me swiftly and warmly to the church.
Where, in the fullness of time, we baptized two adults and four babies, giving Wonder Curate his first hands-on experience. He did well with the adults, with whom he had the primary pastoral contact...and was charmingly awkward with the baby he baptized. He was all genned up on the "football hold"--in theory--but had not been prepared for what to do when the parents, um, "fumble the snap" as it were. (No, he didn't drop her, but he wound up with her head in the crook of his elbow...when his own wee one arrives in January, he'll have lots of practice in swapping little people end-for-end, we know.
Despite the ridiculously savage cold -- Prairie Metropolis was, allegedly, the coldest place in North America on Sunday -- we had a church FULL, and happy with it. Much joy. Pretty cake at the coffee-hour and they saved me a corner piece!
A ride home with offspring (offspring whose cars live in a heated garage, pshaw, I say).
Contemplated the plugging in of Harriet's block-heater. It occurred to me that three short blue extension cords end to end do not, probably constitute the most efficient method of transferring electric energy. Especially when at various times I've driven away dragging at least one of those blue cords -- with the result that its three prongs are all skewed...hard to get good contact that way.
SOOO... rationalized the arrangement of extensions cords and apparently achieved contact, because on Monday, oh hallelujah bananas, the car STARTED for me on the first try. (Granted, the weather had warmed just a bit as well.)
And I took advantage of mobility to get myself a new, dedicated, block-heater extension cord...which fits snugly to its connections at both ends. All is well.
And of such small beer is my life composed.
Ecumenical planning sessions...packing up office...Christmas communications...and other things, many of them pleasant!
Posted by Crimson Rambler at 5:27 PM

You are the ONLY OTHER PERSON I have ever come across to say "hallelujah bananas". Do you hear it sung, as I do?
Glad you've not completely frozen to your desk. Take care xx