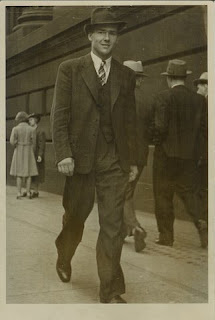 My father was born in Dawson City, Yukon Territory, on Mother's Day, May 11th, 1916, my grandmother's first and always favourite child. He died in Pembroke, Ontario, this morning, March 31st, 2008.

This snapshot was taken by a sidewalk photographer in Vancouver, B.C., sometime before he married my mother (October 9th, 1942). As long as she lived, she had a figurine on her dresser, made of this picture, carefully cut out and glued to a jig-sawed wooden backing. They were married for over 63 years. 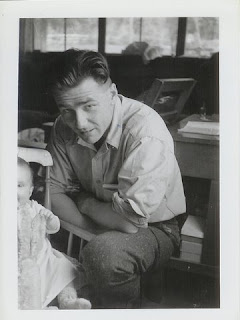 This picture dates to early 1945, after he was discharged from the RCAF, still wearing the regulation haircut! He is just beginning, here, to get acquainted with his first child, who was born while he was far away...and grew up to be me.

You can read more about him right here .
Posted by Crimson Rambler at 8:25 AM

What a life he must have had, and how fortunate you were to have shared in it. You and your family remain in my prayers.

I do thank you. I am trying to find the place in the Book of Job where the writer talks about miners...Dad was a mining engineer...and loved it.

You've made me think of my own father-- a metallurgical engineer who missed the first year of my life overseas in the service-- so I can imagine how you will miss him. I am praying for you this day as well.

As to scriptural mining references, the only thing I can think of is from Deuteronomy, Chapter 8:

For the LORD your God is bringing you into a good land—a land with streams and pools of water, with springs flowing in the valleys and hills; a land with wheat and barley, vines and fig trees, pomegranates, olive oil and honey; a land where bread will not be scarce and you will lack nothing; a land where the rocks are iron and you can dig copper out of the hills.

(((cr))) i didn't realize chorus was your daughter. lovely family you have.

peace be with you and yours in this time of loss.

Like More Cows Than People, I didn't realize that Chorus was your daughter! It's funny/odd that I care about you both.

I'm sorry about the loss of your dad. That's a big hole. Love and prayers.

oh, what wonderful pictures. what a lovely man. thank you for sharing a little of his life...

May he rest in peace and rise in glory, and may you all continue to treasure his life: rich and full in years, and all the ways it has, and will, enrich yours.

I'm so sorry. He sounds like a wonderful and interesting man.

I am so very sorry for your loss. You and your family are in my prayers. Your dad was born the same year as my mother's father. He was a silver, coal and gold miner and died in 2000.

Prayers for you and your sweet family, CR.

What beautiful pictures and story, CR. I'm so sorry.

What a handsome guy - inside and out, it sounds like. Peace to you.

What a handsome man. Thinking of you in your loss.

Blessings on you. Praying for you as you work your grief.

Wow. Sorry I missed this...prayers of peace and comfort!

Oh my dear - I've been away from the net trying to sort out life in new job and new house...I am so sorry and am sending up bucketloads of prayers for all of you.