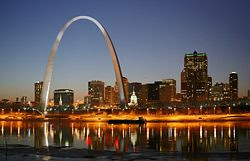 Not immediately, but soon.

I've just booked my plane tickets for St. Louis, MO, and the North American Academy of Ecumenists' Annual General Meeting.
Much to the amusement, or bemusement, or both, of the young travel agent: "And what is the purpose of your trip to St. Louis?" So I told her, and while her jaw was still sagging in disbelief, I added, "Plainly as you can see, we are going to tear up St. Louis in a big way..."

Then she didn't know what to say.

I am very excited, it is all new territory for me from Minneapolis on! Although one of my grandmothers was born in Missouri in 1892 or thereabouts -- down south -- I think the place was inundated in the '30's by the TVA, or so the family legends relate.

That grandmother came to Prairie Province with her parents, who were homesteading, in 1905. Her father, who was born in Memphis, had been a (very very young) soldier in the Union Army...my mother remembered him, said he was a very gentle and sensible man.
Posted by Crimson Rambler at 2:20 PM

Dear Crimson,
Just wanted to let you know that I LOVE your dry sense of humor!!! :) HA ha ha ha
As for future travels, as an FYI, they don't accept travellers chq's at the Mall of America because they argue that your drivers form of id is not an accepted form of id. But, definitely a place to check out!
Woot, woot for ecumenical gatherings!!!

have a great trip!!

Yes, have a great time and say Hi to the Mississippi for me! By the way one of my great-granduncles and his family also homesteaded in Prairie Province around the same time; I believe he was born in New Brunswick but the family had moved across the border by the time my great-grandfather was born.

Have a good trip--and a safe one.

yes, have a good, fun trip! I love on the road!

My grandfather's family was from Southern Missouri--I'm not sure where. The TVA (Tennessee Valley Authority) covered parts of Tennessee, Alabama, Georgia, and possibly South Carolina, but never extended so far as Missouri. However, the TVA did serve as a model for the dams on the Arkansas/ Missouri border which displaced many, though this was mostly a post-WWII phenomenon.

It is mountainous, and prone to floods: natural as well as human artifice.

Definitely visit the arch, unless you are afraid of heights and cramped spaces.

You're going to my native state, CR! Enjoy your trip. I hope it's all you want it to be and more!