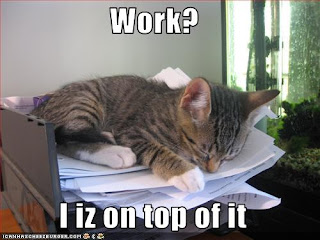 Getting NOTHING done, here, folks... it is +15 in Canadian outside, which is (grind, whir, clank) basically your 60 degrees Fahrenheit.

Palm Sunday was all that one could hope for...a two-hymn procession, waving palm crosses and passing them out amongst the faithful, excellent readers for the Passion Narrative, which we do in parts -- everybody "read out" in a big voice -- four snappin' good hymns, and for a communion anthem, the Allegri "Miserere." We had three guest soloists to form, with Music Director SIL, the necessary quartet. It was just SUMPTUOUS. People wept, most gratifying.

After service I had a 90 minute interview with a sprightly young woman needing the Deep Background on things Anglican for her term paper in Comparative Religion at Colourful U. Ten minutes into our chat, she looked at me narrowly and said, "You know, I think I took Latin from your son last term...!!!" We had a delightful talk and wound up doing a quick evaluation on all the clergymen we could think of in English classical literature. We agreed that Henry Tilney rocks, and that St. John Rivers is a monster, but a sacred monster.

Then today we had 6 persons present, including the Rambler and Trusty Assistant, for the noonhour Eucharist! After which Rambler and TA adjourned to a nearby eatery and ingested lunch and "reformed the constitution."

And TA showed me his birthday present -- the Gospels and Acts volume of the St. John's Bible. "We wants it, my preciousssss...."
Posted by Crimson Rambler at 5:12 PM