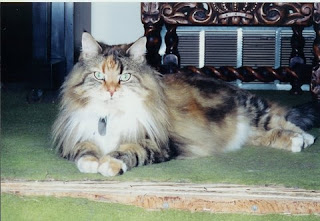 A miscellanea, today.
~ first of all, it's milder -- ten above, Fahrenheit, this morning -- a long way from a thaw, mind you, but so much easier on people, and vehicles, than the below-zero of the past week. Some new snow also. Rabbit tracks in the front yard, but not in the back.
~ I took the first part of the morning for some domesticity: ironing, reloading the dishwasher, sorting bills to be paid, feeding the recycle bin and the shredder, cleaning the litter-box.
~ the old cat, as seen above, appears to be holding her own; we're not sure that her eyes respond to changes in light-levels quite as thoroughly as when she was younger; sometimes her pupils seem to be "stuck on fully dilated."
~ and the business of the church goes on. First of all, consultation with the music director and the band leader on microphones and sound board. Firm, clear, e-mail composed by music director for distribution to lectors and intercessors to leave the lectern microphone strictly alone...even though they pride themselves on their diction and their projection (and therefore turn the mike off, or point it the other way, or mess with it generally).
~ then the phone -- message about one of the parish teenagers who has been ailing for a month, nobody knows why, can we add her name to the prayer list. Message from a prospective bride asking for information. Message from a parishioner announcing we are sold out of international-aid Christmas cards, and do we have his correct financial information?
~ live phone call from elderly parishioner asking to have another parishioner's sister added to the prayer list as she starts treatment for colon cancer.
~ live phone call from elderly parishioner reporting that she has had a hard day: she attended the funeral of one of her bridesmaids this morning, when she went to put her glasses on one lens fell out ("and there I was, as blind as a mouse"), she went and got her groceries and took a taxi home, and why hasn't she received her offering envelopes for next year? (that one was easy, they haven't come in yet)
~ live phone call from another prospective bride planning a September wedding. E-mailed her our wedding policy brochure.
~ checked on activity on Facebook and in the blogosphere.

~ letters to write and a half-dozen phone calls to make, and some excavating of the top of my desk...clearing the decks for the week ahead.
~ there is also HEAT in my office, hurray, a respectable and livable 68. I was getting a little bored with 55...
Posted by Crimson Rambler at 11:13 AM

I also clear the decks of my desk at the beginning of each week. Glad it's a little warmer, both inside and out!

My Mondays scare me every week. I feel as if I need a day to hide away in before I begin all the first of the week tasks.

I remember when I was a cheerful grad student in the NE USA, the thermometer reached 70 degrees at least once in every calendar month...sheer heaven.
Mondays I'm alone in the office, SuperSecretary doesn't come to work until Tuesday; other clergy nearly all take Monday off altogether; so I can kind of putz around with minimal interruptions!

What a busy day! I spent the morning typing Danish Christmas food recipes for daughter's church staff party in California (emailing so she could distribute). Now the dog wants another walk. I'm glad it's warmer for you, too. Below zero in December is just wrong!

I didn't enjoy my snow day because I didn't get one. :-) The snow was light, enought to be slippery but not enough to close church...so my evening with Pavoratti and the cat was after a busy church day. Are you still in England, or are you in the USA?

Peace, breath in, breath out. Peace.