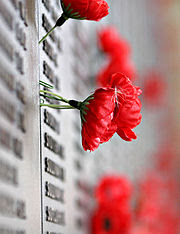 When I got home last night the Rowan Williams book on Dostoevsky was in the mailbox. I've only got to the back-cover blurbs and the title-page, but I notice it is part of a series out of Baylor UP, "The Making of the Christian Imagination."

This morning at our 11/11 service, in lieu of a sermon, and in support of the Christian imagination, I'm going to read the passage near the end of Birdsong, by Sebastian Faulks, that includes these words. (Stephen is an English soldier, a sapper, who has been buried by his own explosion; he is being dug out by Levi and Lamm, who are -- not -- English soldiers. It is eleven in the morning of November 11th, 1918.)

"It was Levi's work, not Lamm's, that had loosened the earth sufficiently at the end of Stephen's coffin for him to be able to drawl out of it, over the fallen body of Jack Firebrace.
On hands and knees he moved back among the debris his own explosion had made. About a yard further along he could see where the tunnel was still intact. It was here that Lamm had broken through. Levi pushed Lamm back and climbed into the British tunnel himself. Tricked by the echo of Stephen's tapping, he turned the wrong way, and began to walk away from him.
Gurgling and spitting earth from his mouth, Stephen clawed his way forward, shouting as he went. He could see light from some lantern swaying in the tunnel ahead of him. There was air. He could breathe.
Levi heard him. He turned and walked back.
As the tunnel roof lifted, Stephen moved up into a crouch and called out again. The lantern was on him.
He looked up and saw the legs of his rescuer. They were clothed in the German feldgrau, the colour of his darkest dream.
He staggered to his feet and his hand went to pull out his revolver, but there was nothing there, only the torn, drenched rags of his trousers.
He looked into the face of the man who stood in front of him and his fists went up from his sides lilke those of a farm boy about to fight.
At some deep level, far below anything his exhausted mind could reach, the conflicts of his soul dragged through him like waves grating on the packed shingle of a beach. The sound of his life calling to him on a distant road; the faces of the men who had been slaughtered, the closed eyes of Michael Weir in his coffin; his scalding hatred of the enemy, of Max and all the men who had brought him to this moment; the flesh and love of Isabelle, and the eyes of her sister.
Far beyond thought, the resolution came to him and he found his arms, still raised, begin to spread and open.
Levi looked at this wild-eyed figure, half-demented, his brother's killer. For no reason he could tell, he found that he had opened his own arms in turn, and the two men fell upon each other's shoulders, weeping at the bitter strangeness of their human lives."
Posted by Crimson Rambler at 8:21 AM

Dear One, thank you.