The Parable of the Talents 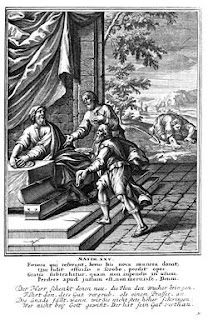 Pentecost 27
The parable of the talents is probably one of the best known in the whole range of the Gospels – and even so, one of themost troublesome. A common response to it, in Bible study, is the cry, “that doesn’t sound like MY Jesus!”

When this happens it is an open invitation from God to dig deeper, to go below the surface.

We get into trouble when we mechanically assign a meaning or an identity to each of the participants in the parable: the landlord or the master “is” God and the servants/slaves “are” you and me, and so on. And in this story, if we decide from the very beginning that the master “is” God, “is” Jesus who is about to leave his disciples with the promise that he will come again, then it isn’t surprising that we should fail to recognize “our” Jesus in all this talk of being flung into outer darkness with the usual amusements of weeping and gnashing of teeth.

There are a couple of moments in this story that need us to pause for a bit…the obvious one, I think, is that the third servant doesn’t seem to be on the same wave-length as the other two. It’s astonishing how readily we assume that he has “got it right” about the master who is master of ALL three – just because he is the only one that stops to characterize the master…as a hard man…a profiteer…an exploiter of others’ labour…there is absolutely no evidence anywhere else in the story to justify that characterization. On the contrary – if you look at what the master DOES, and what the master SAYS, you have to wonder where that servant’s head is.

And yet the phraseology is familiar…we not only recognize the characterization because we are used to the kind of people the servant describes – maybe we ARE the kind of people the servant describes, and that’s why – but I think we mush-wittedly go on assuming that the servant is RIGHT about God too, just because we have previously decided we KNOW what this story is about, it’s REALLY about God and ourselves; therefore, “Yes, that’s right, God is just like this, mmm hmmm” – and then we are left in that “Jesus said WHAT?” position.

Which is a sure and certain signal that we need to back up and look at our assumptions. Surely one of the things that parables are meant to do is to unsettle our assumptions.

We have already heard what the master says to the other servants – and there’s a lovely little phrase in there that tends to slip past without catching our attention – “enter into the joy of your master.” Maybe we don’t notice it because it sounds so archaic and ceremonious and “Middle Eastern” that we dismiss it as just “oh yeah, some more BIBLE TALK.” But it isn’t! It's the second thing we need to attend to.

The master has praised the servants – “How about YOU! Look at YOU!” he says. And then – far from taking away from them what they’ve reaped, earned, he promises them more to be working with – and then he says this neat thing about the “joy of their master.”

I tried to think how to put this into more recognizable words – and I remembered a moment in a movie – not too long ago – called Master and Commander – I don’t know whether you’ve seen it or remember it (it’s not a chick flick) – it’s a kind of a Wet Epic about British Navy Adventures in the Napoleonic era…and there’s a wonderful moment when some amazingly improbably heroics have just happened and the Captain – Russell Crowe – accosts one of his junior officers and says, “Now tell me that wasn’t fun?”

And I think this is what the master says to the first two servants, when they come tottering in all bent double under the weight of their earnings – “Some fun, eh, guys? Shall we do it again, only louder this time?” So we have every reason to REJECT the third servant’s description, because we already know better about the master.

We KNOW BETTER than this about God, as a matter of faith – especially from our vantage point on the far side of the resurrection – and if we can recognize that the third servant is most particularly ill-advised (trying to find a more dignified word than DUMBER THAN CHEESE), ill-advised, to behave this way with regard to a master who is just humanly generous and lavish…how much MORE ill-advised would it be to behave that way to God, who if anything is even more than humanly generous and lavish.

Now the moral, if you really want a moral, is that getting God wrong is NOT a good way to start making decisions about what to do with what God has given you.


The fancy way to say this – I’m borrowing it from an anonymous preacher – is that it is very hard to create blessing, or give a blessing, or enjoy a blessing, when you live in a culture – especially a religious culture – that is founded on the idea of scarcity!!!! And this casts quite a new light on the fate of the third servant. He’s flung into the outer darkness et cetera for one very good and sufficient reason – he has chosen it, and he’s already there. You can even hear the gnashing, in what he says to the master after his return. It’s his native habitat. He can’t be anywhere else, because he doesn’t recognize anywhere else – he can’t even IMAGINE anywhere else to be, except in this kind of darkness.


What then about these talents? If God is “something like” this master…what is it that he gives us to invest, so that it will increase? I think, whether you read the talents historically as very large sums of capital – or rest in the accidental pun on the word in its modern sense – gifts, capacities, skills, aptitudes – the talents he entrusts to his servants amount to the capacity for action, the capacity for choices. Another shorthand way of saying it might be – liberty to act – to choose blessing, to choose grace, to choose life, to choose PRAISE OF GOD – the thing we do in liturgy that we call DOXOLOGY (the Glorias e.g.). And we are to make the choices that he has emkpowered us to make, in such a way that other people’s freedom to choose – to choose all those good things -- is magnified and multiplied. Not out of fear of the darkness and weeping and gnashing, but just because the joy of the master is such a glorious, exhilarating state to be in.


And what our master entrusts to us is independent of market conditions or any other external factors at all. In fact…if I may borrow a slogan from the world of chartered banking – they don’t seem to have used it in advertising much in the last month, perhaps they won’t mind – in terms of what has been entrusted to us, in the freedom to live lilke the servants of a loving, generous, faithful, joyful God – “you’re richer than you think”…or can ask, or can imagine.