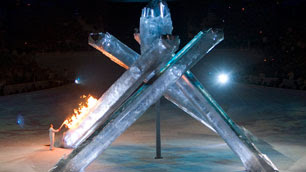 Watching -- entranced -- the Russian presentation, some of it in Vancouver and much of it in many other places, all brought into one experience for the audience by technical means I can't even guess at.

Despite my inherent and ineradicable non-sportiveness... I have loved watching these Olympics... I have enjoyed the "human interest" stories, the courage of the Canadian figure skater whose mother died suddenly the day before her daughter performed; the courage of the Slovenian cross-country skier who slid off the piste into a 10-foot ditch, broke four ribs, collapsed a lung, and still won bronze (as did the figure skater). I have revelled shamelessly in the Canadian victories. I want to holler and blow horns, make loud vulgar triumphant noises in celebration.

I have taken great joy in watching the Canadian athletes and artists with their gold medals, singing the National Anthem. Not well, perhaps, not loudly, but by the Lord Harry when the national anthem is played, WE SING.

I loved watching the Mounties tromping to and fro in their iconic uniforms -- I love the women officers' little regulation hair-dos...

We had a minimum of truly annoying commentators on the Canadian Olympic broadcasts.

And we even saw some brilliant, amusing, touching, durable commercials...the Tim Horton's ad with the immigrant family arriving at the airport in winter; the Superstore ad about nourishing the athletes; the Chevrolet ads with the vehicles talking over their perspective on the games; the Royal Bank ads with the little bowler-hatted banker participating in all sorts of unlikely sports, in the great tradition of the deadpan clown.

Regrets? probably only that Canada 2 did not medal in the four-man bobsled. And perhaps that we have to be subjected to speeches in French by people who don't speak the language.

A very long day for the Rambler -- preached on the hen-and-chickens gospel at St. Curious at both services this morning, with Fab Bishop visiting and former Rector departing, potentially a very fraught occasion; then a reception, and then mid-afternoon a splendid 19th century Romantic piano concert, a parish fundraiser, in complete conflict with the men's hockey final...the turn-out was encouraging despite the external distractions... Some pretty swift updates via PDA at the Intermission, mind you!

I don't think bedtime will be long delayed tonight.
Posted by Crimson Rambler at 6:32 PM

I actually looked into various services that would have let me watch the Olympics on Canadian tv over the Interwebs, but couldn't really justify the cost. Your commercials sound better than ours, or maybe it's just that i didn't see them 90,000 times (and I didn't even get to watch all that much!) We are not that far from Canada so I continue to feel disgruntled that I can't watch your programs. OH well, sometimes the really good stuff like Slings and Arrows shows up on netflix.