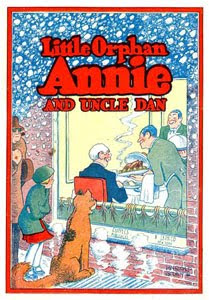 Preached this morning at St. Curious on the temptations of Christ and what they say about the nature of God and the nature of a human being, and managed to set it in context with both other readings AND the Psalm. Once again...I thought I "had it covered" and then the latterly verses of the Psalm detonated in my hearing AS I heard them read at the early morning service. I got rather carried away, I'm afraid...
A light lunch with the Daughter Unit and then home to prepare a sustaining early supper, catch about an hour's sleep, and away with #1 Son to see a local production of Annie, featuring #2 Son. He reported with humorous chagrin of the audition procedure, that he was asked to do a dance routine and then cast as FDR: "Right, I dance like a guy with polio, good to know that." (I am old enough BTW -- and INCORRECT enough -- to miss the presence in the cast of characters of "the Punjab" and "the Asp"--anybody else remember them???)
I do try not to dote, you know, and to be fair-minded and impartial in my assessment of what I see on stage when the offspring are participating. FAIL. The little so-and-so can speak so as to be understood...and when he sings he sings on pitch. Both of which in my astigmatic opinion set him distinctly apart from the rest of the cast. In short, Ma is proud tonight.
And so to bed.
Posted by Crimson Rambler at 10:22 PM