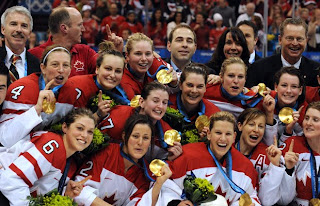 1) Which of the Winter Olympic sports is your favorite to watch?

I enjoy watching almost anything in which I don't have an emotional stake in who wins...until after it is over...because I'm convinced I jinx figure skaters, hockey teams, etc. I like watching curling, see below, because at least in curling nobody is likely to sustain a life-threatening injury, unless of course Rink Rage takes over and the curlers start lobbing the curling rocks at each other overhand... It does seem though that most of the winter sports have as a prerequisite the desire to fling oneself headfirst into the abyss... that said, I get a huge kick out of ski jumping, where at least, mostly, they stay right way up...or intend to. I have a personal though small stake in four-man bobsled this time around as I actually taught one of the team drivers, everything he knows. About Jane Austen. It wasn't a great deal; even then he was booking weeks off to hurtle downhill in various exotic venues...

2) Some of the uniforms have attracted attention this year, such as the US Snowboarders' pseudo-flannel shirts and the Norwegian Curling team's -- ahem -- pants.


Who do you think had the best-looking uniforms?

I liked both those uniforms actually...but there were some that were truly quite beautiful -- was it the Koreans that had the beautiful snowflakes on their jackets in the opening ceremonies? Not too impressed about the "Bermuda" shorts, I must admit. And those toques generally are kind of disfiguring...the various devices for lessening drag were interesting especially in speed-skating. Then there are the figure-skating costumes, and that's "a-whole-nother story" as we say.

TAKE NOTE RIGHT NOW, I will take no guff from anybody about the sport of curling. NONE. Especially not from any citizens whose national butts are about to be kicked by the Canucks. I mean really... this is lawn-bowling/boccie/petanque on ice. What could be more reasonable? And how can you not enjoy a sport in which respectable middle-aged ladies, on all fours, on ice, scream, HARDER HARDER HARDER YES YES YES???

4) Define Nordic Combined. Don't look it up. Take a guess if you must.

Ok, it's skiing. My guess is downhill and slalom; I don't know whether cross-country is included. Maybe jumping as well. What the heck.


(There will be a prize for the best answer, but be aware, this is a judged sport.)

5) If you could be a Winter Olympics Champion just by wishing for it, which sport would you choose for winning your Gold Medal?

oh heavens...not crazy about snow, ice, cold, or leaping into the void in any sense... but probably one of the forms of skiing.
Posted by Crimson Rambler at 9:49 AM

no way, I did not know that!

I will never watch curling the same way again! Oh.my.goodness!

Someone I know tweeted the play by play of the women's curling, and it was positively naughty!!!

Thank you for the visual. I will never be able to watch curling in quite the same way again.

never watched curling until this olympics, and i decided i really like it! (and not just for the reason you describe...)